Never before have I played so badly yet enjoyed myself so much. The quality of our golf over the three days was patchy at times but the enjoyment was of the highest possible calibre.

Nothing could really go wrong once the age-old Scottish ailment of weather was put aside. Unseasonably warm and sunny became the norm and the suitcase load of sou-westers and oilskins remained firmly in the boot. This was a bit of an homage for all four of us (Geoff Edwards, Chris McQuade, Chris Toll and myself) – occasional golfers due to work commitments, this was to be special.

First stop to our billet, then showered, eager and in need of entertainment it was straight off to walk to the links, the sun westering and a pint on board each of us, the first challenge awaited – ‘The Himalayas’. For those of you that have never enjoyed this putting green, you have my pity; it is arguably the finest golf course in St Andrews – ipso facto the best in Britain. It occupies an acre or two of wildly undulating terrain just to the right of the Old Course first fairway. 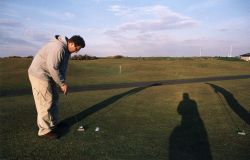 “The course you have just played will never be played again” said Reg Whittaker who can best be described as curator of this masterpiece, “some of the holes will be seen again but not all 18 in that order. I design a new course out there every week.” He has one of the best jobs in the world; he collects the green fees – £2 per round including club and ball hire [£3 2017] – you can use your own but that’s a little unsporting and certainly not in the spirit of the thing. Do not expect a 2mm cut of fine bent grass with no thatch; do expect an experience that will never be forgotten. Lowest score of the weekend came in at a staggering 40 – 14 under threes!

An early start on the Saturday was necessary as we’d come up in the ballot for the Old Course at 0730 – the best time to play this wonderful course as, with few people ahead of you, it is quicker and the cross-over holes are less of a pantomime. The Old Course is my favourite course in the world and it is not that hard to get a tee-time with a near certainty of coming up in the ballot if you stay for three or four days. If you don’t then the New Course and the Jubilee are the top two reserves in my humble estimation – there are three more to boot.

Stand on the first tee, there will be a gallery of some sort behind you even at 0730, hear the starter give you the go ahead; “Play away please gentlemen” – and realise where you are stood and what you are about to do. It’s a stark moment of truth for anyone, but we managed.

what you see on the TV is nothing like what is out there – the swales and subtle nuances of the turf are magnificent. 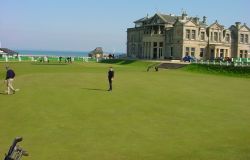 You can play badly on the Old Course as long as you don’t dawdle, it’s allowed. The greens are perfect, huge and fast. The fairways are generous, tightly mown and immaculate. The bunkers are everywhere and desperately dangerous. But, on a benign day of warm sun and no wind, it is not a hard golf course and can simply be enjoyed while the history of the place consumes you. Try it in force eight wind and rain – then breaking 100 will be a cherished card. 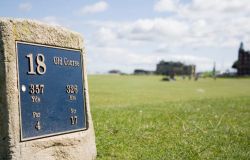 Having played our final tee shots over Granny Clarke’s Wynd, we were overcome with the privilege that we had just been offered – what you see on the TV is nothing like what is out there – the swales and subtle nuances of the turf are magnificent.
[clear]
We counted up – eight pars and a birdie for me thank you very much, don’t ask about the others – and behaved like tourists for the rest of the day; there is much to see in St Andrews – mostly golf related but not entirely. 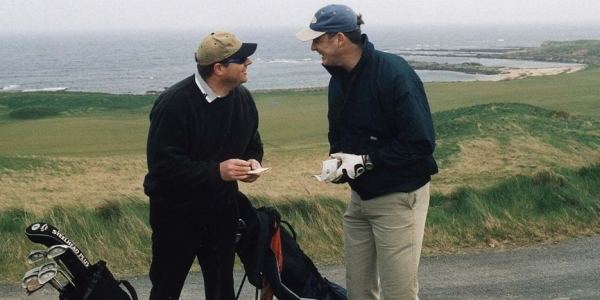 Sunday dawned a little too early for my liking and the sun had disappeared, replaced by a thin drizzle and, oh deary me, a fairly stiff breeze. The starter at Kingsbarns referred to it as “nothing more than an air movement”, but then he wouldn’t be playing in it, thankfully we were and the third great treat of the weekend had begun.

It is a fabulous golf course that could destroy your game if the weather is harsh but is designed to be playable to all levels of golfer.

Opened in 2000 and designed by American golf course architect Kyle Phillips, Kingsbarns is a triumph of design. It is a true links golf course that only had half a links site to work with so the developer moved thousands of tons of sand to create new dunes. It is a fabulous golf course that could destroy your game if the weather is harsh but is designed to be playable to all levels of golfer. Wide fairways, multiple options and slick greens do not punish you unfairly and the atmosphere is second to none. 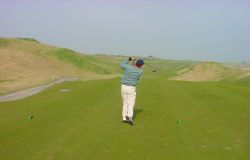 No doubt the par threes will make the headlines at Kingsbarns as they are so scenic but from a pure golfing point of view the par four fifth is stunning and the brutal par five 12th – played along the beach and doglegging left – will be remembered on your death bed. Having charged your adrenalin levels up to illegal heights, the 12th is followed by a par three that, downwind, is less than a sand iron – the only example of cruelty that Mr Phillips displayed in his magnificent design – be prepared to chip back onto this green from behind it. 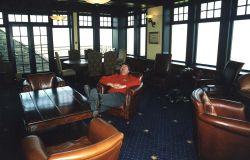 The clubhouse is modest in size but big in quality and does not allow any but golfers to enjoy it, thus there is a feeling that you are special and valued – the staff make you feel that way too; not obsequious and fawning, more friendly and helpful.
[clear]

Read how to play on Scottish links courses in:
Insights into playing Scottish Links Golf – a different game

Kingsbarns is right up there with the Old Course, truly a ‘must-play’.

By now, our previously under-employed golfing muscles were beginning to complain and we had lost Edwards to an evening flight back to London.

And so to the final stage of our Odyssey; the Queens Course at The Gleneagles® Hotel where we picked up our ‘Edwards substitute’ in the form of Phil Reeve, a Contracts Manager for international golf course constructors, Contour Golf Ltd. Moreover Reeve plays off eight, we suddenly had class in our midst to match the surroundings.

Everyone knows about the Kings Course at Gleneagles and more and more will get to know the Jack Nicklaus designed PGA Centenary course thanks to The Diageo Championship at Gleneagles in June and the upcoming 2014 Ryder Cup, but the Queens? We almost decided not to say how much we loved the Queens in order that it is not over-run with golfers. Having played all three courses over the years I can safely say that the Queens is my personal favourite. Not as long as the other two, not as punishing and maybe ‘murderable’ under the right conditions, but you will not find a more elegant, more aesthetically pleasing golf course anywhere. 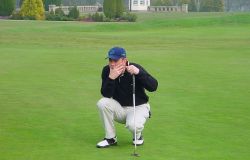 Curlews whooping around the course, perfectly placed greens and majestic fairways made this the perfect place to finish our homage to Scottish golf. By now three of us had resorted to pulling trolleys in response to our muscular protests but, in truth, the aches faded away as hole after hole of sheer beauty was presented for our delectation. As expected, Reeve showed us how the game ought to be played and, as we trooped onto the elevated 18th tee, Toll showed us how to enjoy the bizarre. He collapsed into hysterical laughter at the sight that presented itself – 20 or so greenkeepers swarmed all over the landing zone with fluorescent yellow buckets of seed mix for the divots. 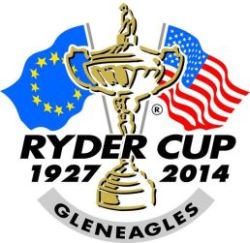 It was apt really – first tee nerves on the Old Course and last tee nerves on the Queens as the sons of toil parted to leave the fairway open for us while casting professional eyes on our efforts. Two of us showed true talent, two of us did not. Names will not be named but suffice it to say that McQuade walked off the final green saying, “Never before have I played so badly yet enjoyed myself so much.”
[clear]
He was right, the quality of our golf over the three days was patchy at times but the enjoyment was of the highest possible calibre; this truly was the best St Andrews golfing weekend ever.

Trevor has worked as an editor and contributor to many golf industry publications. In the past he has held the position of Editor in Chief at ‘Golf Course News International’ and ‘The Golf Course Magazine’, as well as Contributing Editor of ‘Golf Inc.’ and has written many articles on a wide range of subjects in a freelance capacity. He lives in Fife, for the last 4 years he has been a full time student at St Andrews University and is currently working at St Andrews University in Special Collections Division

We use cookies to ensure that we give you the best experience on our website. If you continue to use this site we will assume that you are happy with it.OkPrivacy policy