Kingsbarns is now firmly ensconced as a ‘must play’ on any visit to Scotland – right up there with St Andrews Old Course, Carnoustie and Turnberry; in fact it is hard to imagine any other golf course being mentioned as much in the same sentence as the Old Course. Kingsbarns is a success, period.

So here’s the plan: take a potato farm with little topographical interest (save the beach running alongside it), ensure that it is slap bang in the middle of many other golf courses (including the most famous course in the world), build a golf course that will be closed for the winter (when all the competition remains open) and don’t put any real estate or resort infrastructure in place.

Sound like a recipe for disaster? Sure does, but this is pretty much what Art Dunkley and Mark Parsinen did back in the late 90s when developing Kingsbarns Golf Links here in Fife along with architect Kyle Phillips who was fresh out of RTJ II at the time. The rest is history and Kingsbarns is now firmly ensconced as a ‘must play’ on any visit to Scotland – right up there with St Andrews Old Course, Carnoustie and Turnberry; in fact it is hard to imagine any other golf course being mentioned as much in the same sentence as the Old Course. Kingsbarns is a success, period. 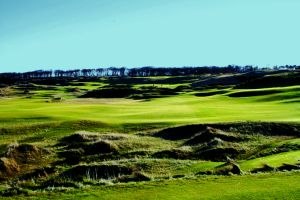 Kyle Phillips was aware of the task ahead of him when the ball was set in motion, “It was true at the time Kingsbarns was being planned that there was not really [an excess of] ‘demand’ for golf in St Andrews, so we were all aware of the fact that Kingsbarns needed to be a ‘must play’ venue if it was going to succeed.” The dramatic sculpting employed by the shaper, Jason Garton, atop his dozer has much to do with the achievement of this aim; the traditional construction and design of the course provides most of the rest.

Although the dunes that flank the beach are natural and are what one has come to expect from links courses, the landforms throughout Kingsbarns are entirely man-made. This apparent juxtaposition between traditional ethos and man-made construction is explainable though – Kingsbarns could be said to be a minimalist design in that the minimum amount of ‘muckshift’ required to provide an exciting golf course was employed. The fact that this minimum was a 330,000 cubic yard movement of earth is, almost, immaterial.

The land at Kingsbarns was a gently sloping field going down to the beach and, aside from the views and a couple of obvious routing options (notably the par five 12th and the par three 15th) it was not immediately inviting for a golf course.

Phillips had greater vision though, “When I first walked onto the property at Kingsbarns, I wondered how the guys at Pebble Beach must have felt when they explored that truly outstanding site. I knew a golf course could be designed on the existing farmland, but what I envisioned was to transform the farmland into a dramatic links-style course.” 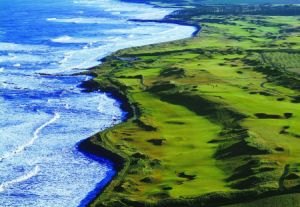 The construction of the links came under scrutiny from the trade press and much was made of an alleged ‘capping’ of the entire site with one metre of imported sand in order to make the links possible. Was this something that Phillips was happy with? Not quite: “Not true, all the sand came from on site and nothing was imported. The greens complexes sand came from the areas of holes 6, 7, 16, 17 and were blended to be consistent and then moved to each green site.” Which makes the results even more remarkable – effectively this is traditional golf course construction but on a grander scale than the ‘old masters’ were able to conceive or achieve.

Kingsbarns is so much more than a ‘field of dreams’ (build it and they will come); it is also a masterpiece of marketing. First up is the comforting notion of an ‘American’ course in Fife; certainly it is a course that is traditional links in the sense of dramatic landforms and sandy, hungry soil but it has been built by US developers using a US architect and has been marketed to the US market. It is, if you like, “One of ours over there” to the dominant US tourist market.

Second, the timing was exquisite – when Tiger Woods was winning at St Andrews in 2000, Kingsbarns was opening and the TV companies were desperate for side stories to bulk out their broadcast. Add a quote (inaccurate though it might be) from a worthy such as Sir Michael Bonallack and suddenly the media attention is at fever pitch. For the record Sir Michael exclaimed, “Kingsbarns might well be one of the last true seaside links sites capable of development in Scotland.”

However the proof is in the pudding and once the Open had come and gone, the interest in Kingsbarns remained despite the green-fee being set higher than that on the Old Course. All the rankings on the planet had a new entrant and this too was music to the ears of Parsinen, Dunkley and Phillips: the key market of North America is nothing if not swayed by rankings, thus success was assured. 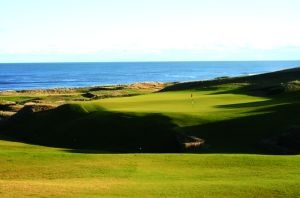 It is worth noting that while so many factors were engineered/taken advantage of to suit the US tourist market, there were some that were not. For example the fairways and greens are not force fed fertiliser in order to maintain an immaculate lushness that is so common throughout the USA – in fact less than 25kg (about 55lbs) of nitrogen was applied in 2006. The very fact that greenkeeping doyen, Walter Woods (ex of the Old Course) was brought on board from the outset as a consultant was an encouraging and ultimately profitable decision.

Kingsbarns is a success story that is out of the ordinary in golf today. A pure golf development – no real estate and a small yet perfectly formed clubhouse – that has bucked recent trends and gone its own way; consider 29,000 green fees over an eight month period or so (closed between mid-November and 1st April) with top fee being £226 (approx $340US). 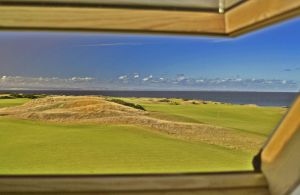 “Kingsbarns is so successful that a national golf magazine even published the view from the gent’s lavatory as being one of the best views in golf; high, if somewhat weird, praise indeed”

Useful Links:
Back to Top

Trevor has worked as an editor and contributor to many golf industry publications. In the past he has held the position of Editor in Chief at ‘Golf Course News International’ and ‘The Golf Course Magazine’, as well as Contributing Editor of ‘Golf Inc.’ and has written many articles on a wide range of subjects in a freelance capacity. He lives in Fife, for the last 4 years he has been a full time student at St Andrews University and is currently working at St Andrews University in Special Collections Division
Back to Top
claire On September 9, 2014   /   Scotland blog